Robert A. Stern, PhD, Professor of Neurology, Neurosurgery, and Anatomy &

This Project Is Being Conducted In Partnership With The Independent

subconcussive trauma, may lead to the neurodegenerative disease, chronic traumatic

encephalopathy (CTE).1-9 Exposure to these repetitive head impacts (RHI) from contact and

RHI exposure, as well as the age of first exposure (AFE) to tackle football, are associated with

neurodegeneration, and structural brain changes on MRI scans.10-17 CTE and other later-life

cognitive and neuropsychiatric consequences from playing football is unknown,

particularly at the college level. The existing evidence is limited by small sample sizes,

possible biases from participant recruitment methods, and a focus on former professional tackle

football players. Many millions more play or have played tackle football at the college level and

thus it is this large cohort which could possibly pose the most significant public health concern.

There is, therefore, a need for a large-scale investigation of the cognitive and neuropsychiatric

In contrast to the focus these past several years on CTE and related later-life cognitive,

mood, and behavior changes in former football players, there has been very little research on

possible increased risk for other medical conditions in former football players. The limited

research that has been conducted has been on former professional (NFL) players, with very

mixed results.18-24 There is a need to study the prevalence of other medical conditions and

disorders, across all body systems. In particular, because of frequent orthopedic injuries

incurred during football, it is possible that former collegiate players may have an increased

program, all between the ages of 58 and 75, provides a unique and important opportunity. Prior

to the implementation of this project, the Notre Dame Former Players Medical Research

Association had already undertaken the critically vital tasks of: (1) compiling the contact

information for, or knowledge of death of, 97% of all of the senior varsity football players from

to participate in this research; and (3) obtaining the informal support of key members of the

University of Notre Dame leadership. The establishment of a partnership with experienced

scientifically sound and cost- and time-efficient research project, one that will likely result in

valuable findings pertinent to all of the participating former Notre Dame players, other former

college players from the same era, and all past, current, and future college football players.

Aim 2. Characterize the current cognitive and neuropsychiatric functioning of former

in functioning and/or new disorders/diagnoses.

and coached by Dan Devine during the 6 seasons 1975-1980. The total number of players on

those teams is 509. In order to reduce potential ascertainment bias and other potential biases in

the sample, the goal is to gather basic health information on the entire group of 509 former

players, whether currently living or deceased. Former players from those teams have recently

organization that is independent of the University of Notre Dame). Through formal and informal

approaches, including word of mouth, the members of the Association have developed an up-todate

have died. There remains 72 former players (14%) for whom there is no currently known contact

information. Staff at the BU CTE Center, working under Drs. Stern and Alosco’s direction will do

subjects. In addition, working with the Association, contact information will be sought for the

next-of-kin of the deceased former players in order to contact them to provide medical,

neurologic, psychiatric, substance abuse, cognitive history, and cause of death of their loved

assure strict confidentiality of their responses to all questions and surveys, and to cognitive test

results. These include: (1) the responses to all questions and results will be stored in a secure,

password-protected, and encrypted database at the BU School of Public Health; (2) all

responses to questions entered into the database will be de-identified (i.e., name, date of birth,

address, and other personally-identifiable information will be stored separately from the

responses to questions); (3) all study staff undergo confidentiality training and have been

trained and nationally and locally certified in the Protection of Human Subjects; (4) no

Former Players Medical Research Association or the University of Notre Dame; and (5) prior to

initiation of the study, the protocol (including methods of obtaining telephone- and/or onlinebased

participation by obtaining data in a stepwise fashion as seen in the Figure 1. It is anticipated

online questionnaire (or, if telephone interview is requested/required, the same questions asked

by trained research assistants by phone) to ascertain basic medical, neurologic, and psychiatric

history and diagnoses. Participants (or next-of kin) will then be asked to enroll into the existing

Study (PI: Stern), which is one of the few prospective, longitudinal studies of contact sport

athletes. The LEGEND Study began in 2011 and involves telephone-based sport and repetitive

head impact exposure history and cognitive assessments, as well as web-based evaluations of

mood, behavior, and cognition of contact- and non-contact sport athletes across the US (further

methodological details provided below). ~1,000 former and active athletes, including ~500 male

listed below. In the following section, the methods involved for each of the Specific Aims will be 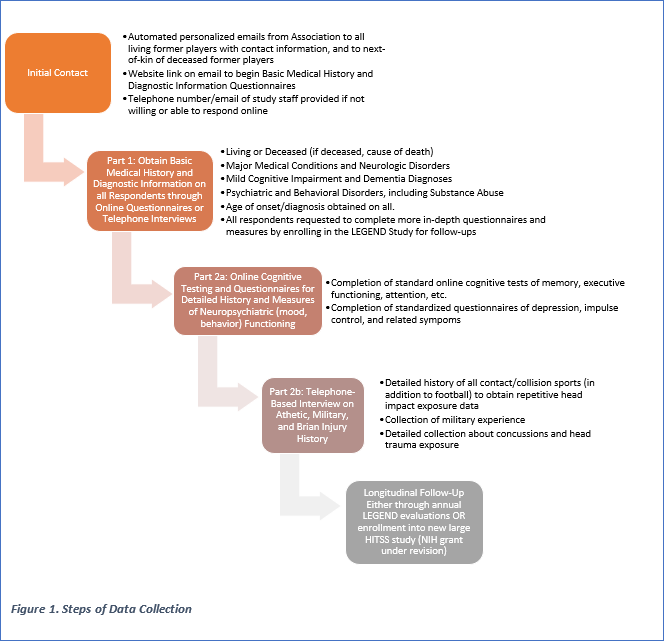 Committee co-chairs. If a former player is unable to comprehend or adequately respond to the

consent, a spouse or legally authorized representative for the former player may complete the

initial survey. The email will describe the purpose of the proposed study and the associated

procedures involved, including statements that the study is being conducted through a

will be confidential. Within the email, there will be a link that interested participants can click on

and be directed to a secure, confidential, study-specific website that will provide additional

information, request informed consent, and ask the individual to respond to questions pertaining

dementia and others); psychiatric and behavioral disorders (including substance abuse); age of

onset of each disorder; and, for deceased individuals, cause of death (completed by next-ofkin).

At the end of this initial survey, all respondents will be given information about Part 2 of the

interview and asked to participate or find out more information.

Aim 2: Characterize the current cognitive and neuropsychiatric functioning of

Online Cognitive and Neuropsychiatric Testing – Part 2a: Individuals who respond to the

query at the end of the Part 1 Health Survey that they would like to participate in, or find out

Dame project. At this landing page, they will find additional information on Part 2 and, if

interested, they will be asked to provide consent to continue.

Four to six months after consenting, participants will receive another email containing a

minutes and will include the CogState Brief Battery (CBB), Lumos Labs NeuroCognitive

Performance Test (NCPT), and MemTrax Memory Test to highlight aspects of cognition we

functioning, attention, and psychomotor speed among others.

[AES]). These questionnaires will take approximately 15 minutes to complete. All of these

measures have normative data from which standardized scores will be derived, as well as cutscores

to determine the presence of clinically-meaningful levels of impairment. At the end of

these questionnaires, the participant will be notified that they will be contacted by a member of

the study staff to set up a 20-30 minute telephone-based interview.

2b: After an interview time has been arranged, the study staff will contact the participant and will

interview the participant about their football and other contact sport history (e.g., seasons

group.” Although the use of control group is often the optimal design for studies aimed at

examining risk of a health/medical issue in a specific population, in some types of research, it is

not possible to define the appropriate control (or comparison) group characteristics. For this and

other reasons (e.g., logistical complexity, lack of funding), some studies, including this proposed

study, are able to examine questions of risk and describe the current level of participants’

functioning by comparing the participants’ data (e.g., diagnoses, performance/responses on

standardized tests, death rate), to available health and mortality statistics for the larger

Select Publications based on the LEGEND Study

problems with executive functioning in college and professional football players.

exposure to American football and long-term neuropsychiatric and cognitive outcomes.

follow-up evaluation. These evaluations will be similar to those described above. These will

and Trauma Surveillance Study, HITSS) that, if funded by a grant (to be submitted in June 2019

to the National Institutes of Health), would replace the current LEGEND Study, using mostly

later-life dementia and related disorders. However, the direct relationship between

neuropsychiatric consequences is not well characterized. Results from this project will

consequences of tackle football, particularly at the college level. In so doing, this study

will advance research on the diagnosis, treatment, and prevention of the long-term

including CTE. In addition, this study will be one of the first to address overall later-life

health status, including diagnosed medical conditions and substance use disorders, of

microvascular injury, and early tauopathy in young athletes after impact head injury and

Modeling the Relationship between Repetitive Head Impacts, Microglial Activation, and

(2015). Age at First Exposure to Football Is Associated with Altered Corpus Callosum